By Morgan Walsh and Ana Chelidze

For years and years at East Greenwich High School, The Rock has been a staple of school life. Each morning as juniors, seniors, parents, and teachers drive down Avenger Drive, they pass by The Rock. When you go up close, you can see layers upon layers of sun-hardened spray paint from years of senior night announcements, birthday messages, and school news.

Recently, a group of lgbtq+ students decided to paint their own message on The Rock. Last Wednesday, June 2nd, the group painted a Pride Flag, spraying “Happy Pride!” over it. While students had enjoyed the initial painting of the rock, on June 6th, just four days later, they had to paint it again due to a giant “X” being painted over it along with the words “Nah. Nah. Nah.”

Ella Saint, a junior who had attended the first painting of the rock, explained the group’s feelings prior to the incident, “At first I was excited, and I was happy, because, you know, we were getting together as a community to paint the rock. It was fun. We had snacks, we played music, we got to know each other—it was really fun. And I think we all kind of knew that something like this was going to happen, we were actually taking bets on it, like for how long the rock would stay un-vandalized. But it was kind of a joke, and it was really upsetting that it actually did happen, you know?”

Though some were shocked, sophomore Geoffrey Aptt said he was “not surprised by the reaction that people had.” Aptt was one of the original group of students to paint the rock for Pride.  He mentioned that while the group was painting, everyone was wondering how long the message would remain unaltered. “I was like, ‘do we have extra paint? Cause this is going to get hate crimed.’” Michaela Shunney, a junior and the organizer of East Greenwich’s first-ever Pride Event, echoed this sentiment, saying they “were prepared for that to happen,” and just to be safe, “had bought extra spray paint.” 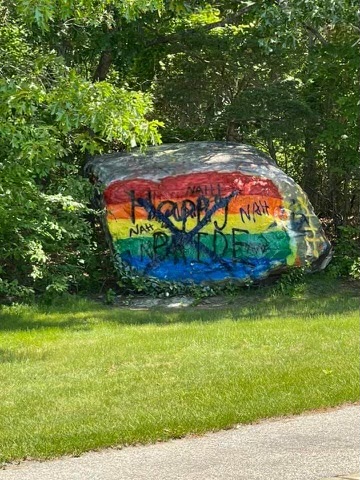 Ella Saint was the first to have seen it, sending out a text for backup. Even she couldn’t predict the community reaction. Where she expected only a handful of people to respond, she was shocked by the turnout. “It kind of became something I didn’t expect. There were, like, twenty or thirty people there.” And the support didn’t just come from the students. EGHS principal Kenneth Hopkins, Superintendent Meyers, and Assistant Superintendent Podraza all came to the repainting to show their support. “Obviously one incident is one incident too many,” Hopkins said in regards to the vandalism. He reminds us that the key thing to remember is that “it’s not everybody in this community” and that “there’s a lot more people that are in support than are not.” 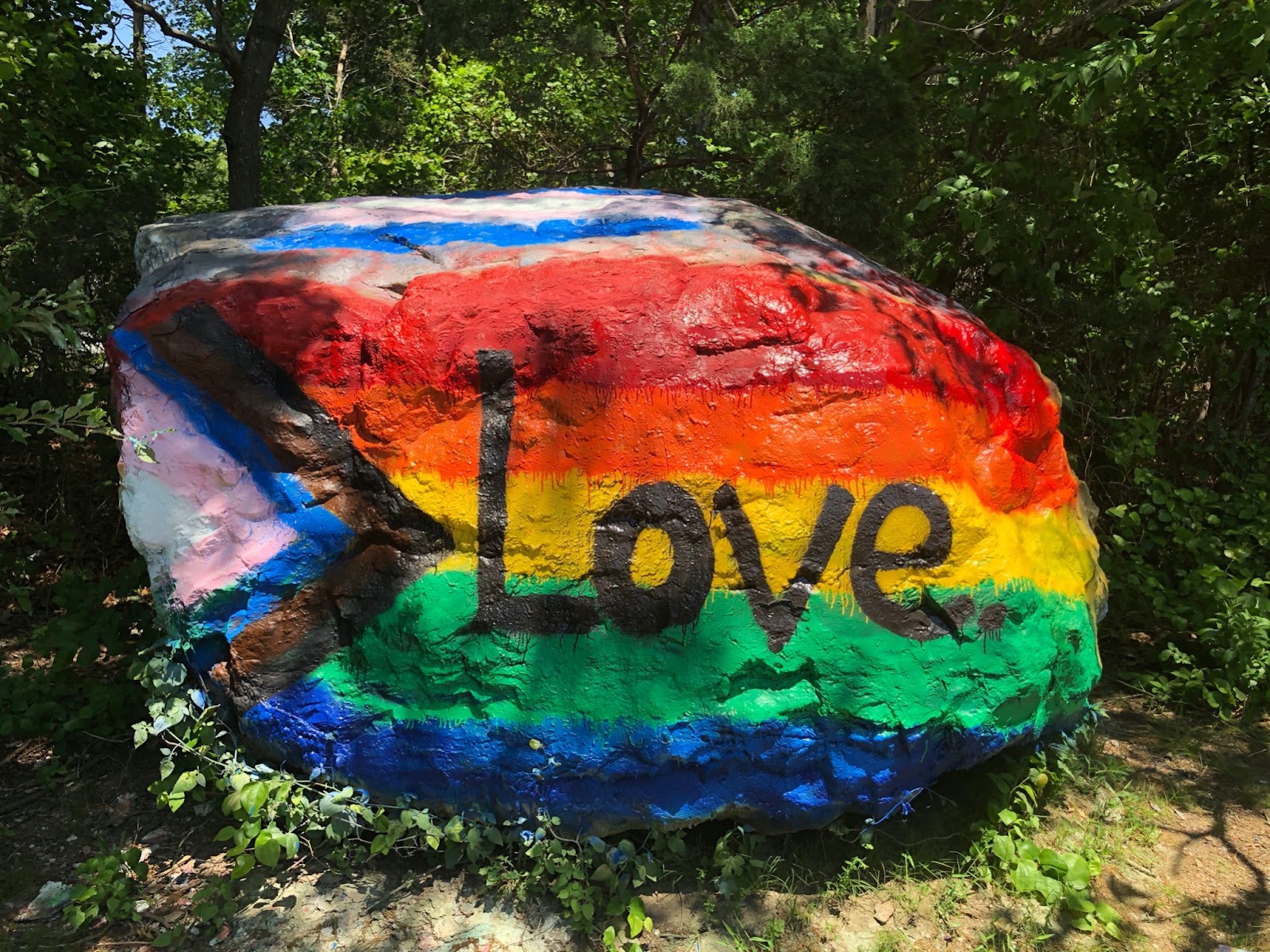 News of the incident had been upsetting to both families and staff of East Greenwich High School, though instead of feeling defeated, members of the lgbtq+ community around the school came together once again to repaint it. This time they painted the modern pride flag, which includes stripes for transgender, black, and brown communities, as well as “Love” written across the banner.

According to Mr. Hopkins, the Rock is “old school social media.” But in addition to its defacement, problems moved from “the old school media” of the rock to online as members of the LGBT community posted on Instagram and other social media platforms about the event. Comments were made claiming that Pride Month should not exist, sparking online fights between students. Not all comments were negative though, and the group received support from different students and parents in the community.

In fact, the group largely benefited from the attention received through social media. As a result, ASAPP (a local, teen-led, mental health organization) started an online fundraiser for the Trevor Project. Michela Shunney, who took part in organizing it, explained, “we were just talking about ways that we could take this and make it into something, and one thing that immediately happened was Miguel (Figueroa) actually had the idea that any time the rock would be vandalized or painted over, we would all donate $20 to The Trevor Project. So, immediately we were all like ‘great, we’re gonna donate.’ and anytime somebody does something to the rock, or says something homophobic, we’re goning to donate money and…even with all this hate there’s gonna be someone benefiting from it.”

In the East Greenwich School District’s official “EG Moms” Facebook group, mothers of students voiced their outrage at the disrespectful response to the Pride message, as well as their support of their lgbt+ kids, with more than one mom commenting “love always wins,” on Sheri Shunney’s original post about the incident.

All of Sunday, social media was flooded with posts, stories, and comments in response to the Rock, and most of it was overwhelmingly positive. The Trevor Project fundraiser’s original goal was $100. As of today, over $500 have been donated.

Despite any backlash they might face, members of the lgbtq+ community at EGHS continue to be prideful in who they are as a community. In the words of Julia Erickson, a sophomore, “really all it’s done though is made the LGBTQ community stronger, and the Trevor project gets so much more money.” Her sentiments were echoed by Matt Cosgrove, a fellow sophomore,  “we’re like a hydra, you can cut off one of our heads but we’ll grow back two. We get stronger every time we get knocked down.”

In the spirit of continuing on, the group will be holding a Pride Picnic at Academy field this month. “Michaela and I planned the first East Greenwich Pride Event,” said Cosgrove. “We’ve been planning this since March. It’s happening June 26th, 11 am to 1 pm, at the Academy Field. We wanted it to be a community event with local businesses and feel open to members of the school, very student-driven.”

As Pride month continues, ASAPP and the LGBTQ members of EGHS show that it is important to remember that we all belong to the same community. Despite differences people may have in gender and sexuality, people have come together to spread the message of love for Pride Month.

Ana is currently a junior, graduating in 2022. Her favorite book is The Call Of The Wild, and she loves writing about the teachers and curriculum changes because knowing the faculty and staff and how much effort they put into our education is important to her. How to Be a Superhero